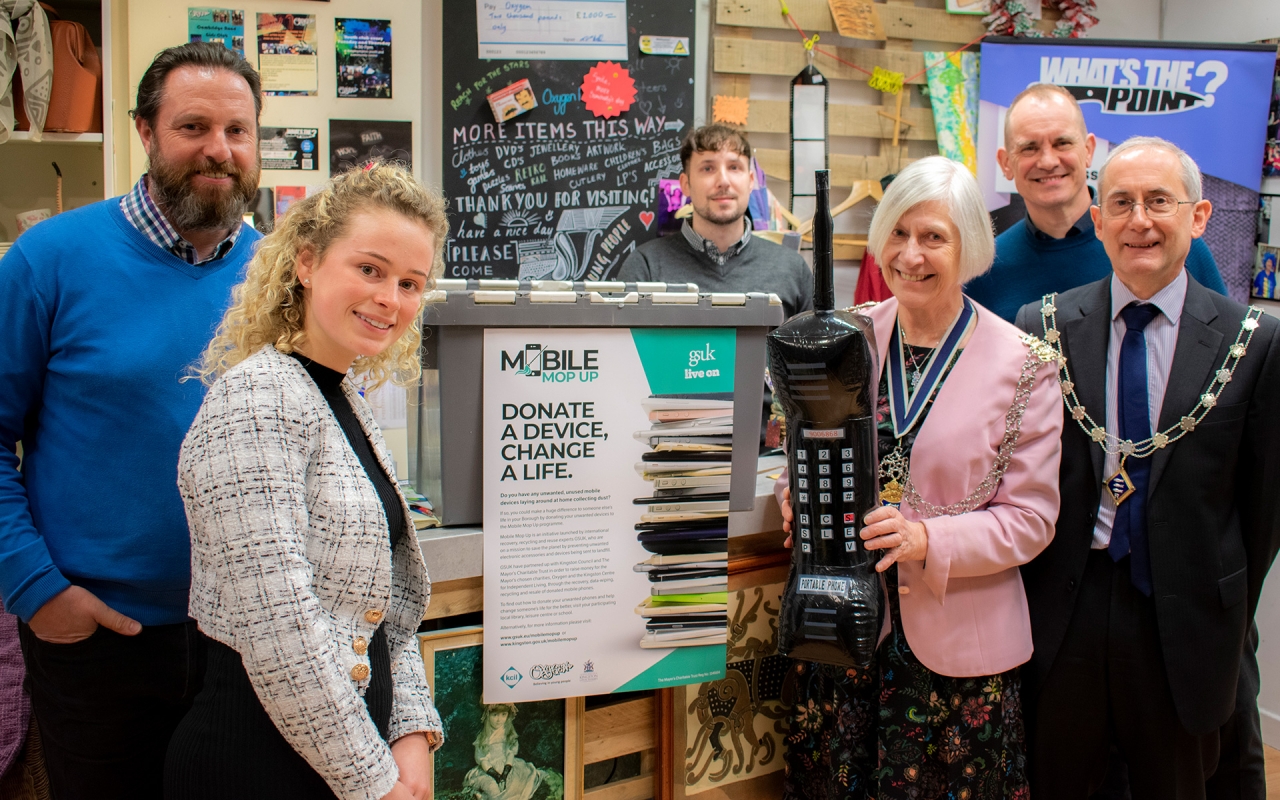 The drive, which took place in 2020, saw secure boxes delivered to locations around the borough, along with schools and shops requesting for donations, with residents dropping off their unused mobile smartphones – resulting in hundreds of devices being collected, reloved and redistributed to raise funds for the Mayor’s Charitable Trust.

Genuine Solutions partnered up with Kingston Council and the Mayor’s Office to ask residents to donate any unwanted mobile devices. Once received these handsets were securely wiped of any data, re-loved and those in working conditions, redistributed through the Genuine Solutions sales network, extending the lifecycles of these devices and preventing them from ending up in landfill.

The proceeds raised from the Mobile Mop Up initiative were donated to the Mayor’s Charitable Trust, with Councillor Margaret Thompson nominating Kingston Centre for Independent Living (KCIL) and youth charity Oxygen as her two causes for her time as Mayor.

I want to thank Genuine Solutions for their tireless work and dedication on this project.

The Mayor of Kingston, Councillor Margaret Thompson, said: “I’m thrilled with the amount raised by the Mobile Mop Up project. Kingston’s residents care about their community and are incredibly generous people. I want to say a huge thank you to everyone who has donated a handset to the cause – you have raised money for charity and in an environmentally-friendly way and saved plastics, chemicals and metals from heading into landfill.”

“I want to thank Genuine Solutions for their tireless work and dedication on this project. We are keen to continue our partnership and launch a similar drive in the near future, we will be examining if we can do so in a safe way given the current climate.”

Anna Morsa, Commercial Director at Genuine Solutions, said: “It was an absolute pleasure to support the local charities in our community. The support from the public, schools and business has been truly great and it has been humbling seeing so many people giving to such a great cause in an unprecedented time.”

It has been humbling seeing so many people giving to such a great cause in an unprecedented time.

“We would also like to take the opportunity to thank the Rangers for the support they gave on the collections of totes. We look forward to supporting the next launch and pushing the bar further upwards in the amounts raised.”

Congratulations to our Star of the Month – Cristina Popa Cristina has shown great enthusiasm since joining our Envi… https://t.co/GyXjUU5wrT

It was wonderful to gather together last Friday for our company 'All Hands' meeting. We battled against each other… https://t.co/hYjw5Xe7LL

This International Women’s Day, we’re recognising our talented and diverse female workforce and standing alongside… https://t.co/peT784uhOw

Our vision is for us all to enjoy technology without it costing the Earth. We reduce the wasteful impact of technology by providing ethical and sustainable choices.

We use cookies on our website to give you the most relevant experience by remembering your preferences and repeat visits. By clicking “Accept All”, you consent to the use of ALL the cookies. However, you may visit "Cookie Settings" to provide a controlled consent.
Cookie SettingsAccept All
Manage consent

This website uses cookies to improve your experience while you navigate through the website. Out of these, the cookies that are categorized as necessary are stored on your browser as they are essential for the working of basic functionalities of the website. We also use third-party cookies that help us analyze and understand how you use this website. These cookies will be stored in your browser only with your consent. You also have the option to opt-out of these cookies. But opting out of some of these cookies may affect your browsing experience.
Necessary Always Enabled
Necessary cookies are absolutely essential for the website to function properly. These cookies ensure basic functionalities and security features of the website, anonymously.
Functional
Functional cookies help to perform certain functionalities like sharing the content of the website on social media platforms, collect feedbacks, and other third-party features.
Performance
Performance cookies are used to understand and analyze the key performance indexes of the website which helps in delivering a better user experience for the visitors.
Analytics
Analytical cookies are used to understand how visitors interact with the website. These cookies help provide information on metrics the number of visitors, bounce rate, traffic source, etc.
Advertisement
Advertisement cookies are used to provide visitors with relevant ads and marketing campaigns. These cookies track visitors across websites and collect information to provide customized ads.
Others
Other uncategorized cookies are those that are being analyzed and have not been classified into a category as yet.
SAVE & ACCEPT